Because the park is so secluded, to set foot on the nearest of the five islands, Anacapa Island, you have to take a boat from one of the mainland visitor centers located in Ventura, CA and Santa Barbara, CA. Access via plane and private boat are also allowed.  Most visitors visit the Channel Islands see East Anacapa to stare into the ocean atop Arch Rock and see the lighthouse. But scuba divers can take in the underwater kelp forests of Middle Anacapa and see the sunken remains of the S.S. Winfield Scott. Check out the list below to see other things to do while visiting the Channel Islands.

Things to do while visiting: 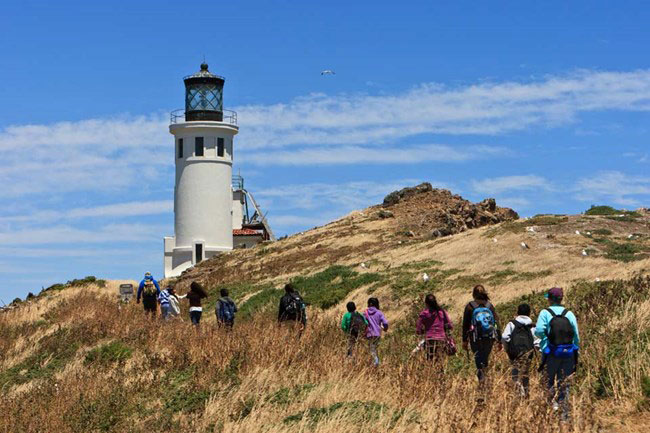 Hiking on Anacapa Island will provide breathtaking views. After scaling rugged cliffs using the staircase from the landing cove, you’ll see beautiful coastal views and see the last lighthouse ever built on the west coast. Although there are parts of the islands not open for hiking, there are 2 miles of scenery available to hike.

Anacapa Island has seven campsites available on the island. Reservations are required, and you’ll pay $15 per night. There are no services on the island.

Kayaking on any of the 5 Channel Islands is extremely dangerous and should only be attempted by advanced kayakers. If you decide to kayak on any of the islands, never go alone. It is imperative that you always have at least one person with you while attempting any water sport. There are no lifeguards on duty, and several deaths have occurred while kayaking. That being said, kayaking toward Arch Rock or Cathedral Cove will give you views of wildlife, sea caves, and arches.

The only water access on Anacapa Island is at Landing Cove on East Anacapa Island. Some of the best diving and snorkeling in the world is within the Channel Islands.

Frenchy’s Cove on Anacapa Island is a great tidepooling spot. Sea stars, anemones, urchins, barnacles, mussels, and many other rare species can be seen from these tidepools.

From Pinniped Point, Cathedral Cove, or boats on Anacapa Island, harbor seals and California sea lions can be visible. 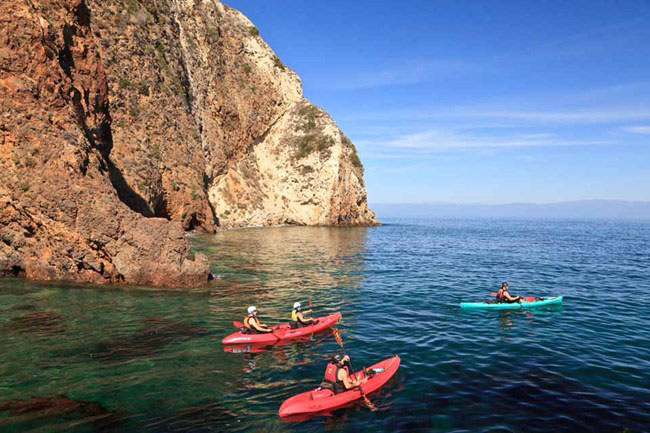 Hiking on Santa Cruz Island will give you a variety of scenic views. Some of these trails will show flat portions of Scorpion Valley, and others will provide rugged paths of Montañon area. No hiking is allowed beyond the fenced boundaries of Santa Cruz Island or any other island.

Santa Cruz Island has 31 campsites available in the eastern part of the island at Scorpion Ranch. Reservations are required and range from $15 to $40 per night. There is no camping allowed on the western portion of the island, the nature conservancy. Portable water is accessible on the island.

Lots of seabirds are on Santa Cruz Island, but there are one particular species that visitors flock to see. The Island Scrub-Jay can only be found on Santa Cruz Island. In no other place in the world can you catch a glimpse of this beautiful rare bluebird.

Scorpion Beach, providing mixed sand and cobblestone, is the desired location for watersports because of its easy beach access, clear water, the location of campsites, and ease of year-round transportation. Like the other Channel Islands, there are no lifeguards on duty, and you should take extra caution when partaking in any water sport.

Smuggler’s Cove on Santa Cruz Island is one of the most accessible tidepools on the Channel Islands. 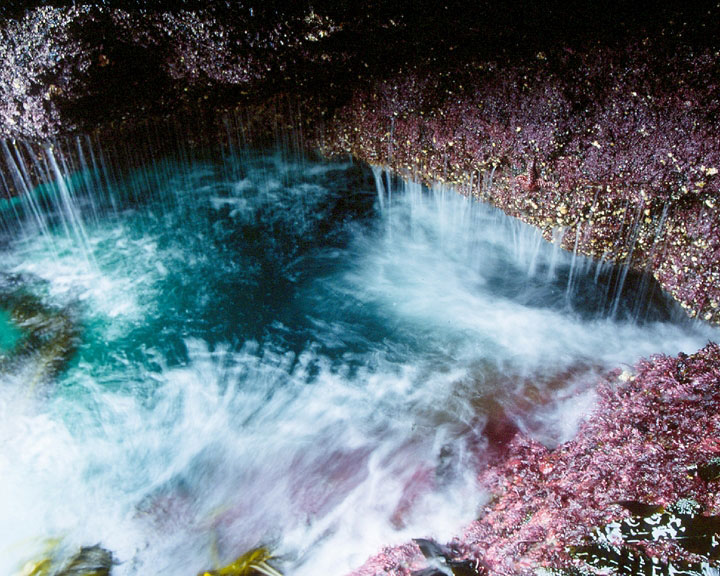 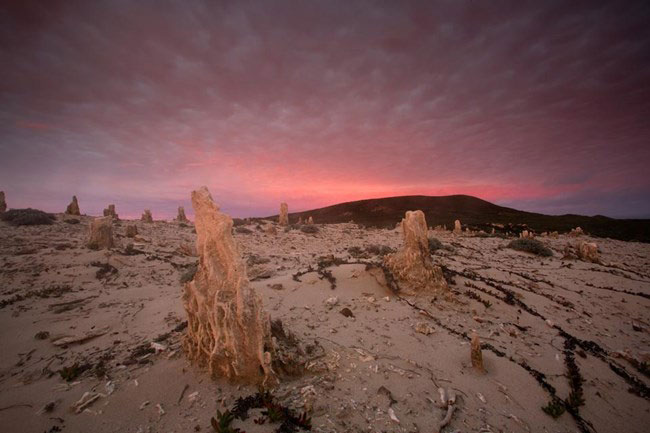 To visit San Miguel Island, a permit is required to access the island. Getting to San Miguel Island is more difficult, and the weather can be intense. Proper planning before arriving here is imperative.

9 Campsites are available on San Miguel Island. Reservations are required, and $15 per night. Access to the campgrounds, near Lester Ranch, is over 1 mile, uphill, from the landing. Proper preparation is required. There are no services on the island.

Taking the guided 16-mile round trip hike to Point Bennett will be tough, the rewards will far outweigh that trek. On this hike, you’ll get to see the world’s largest congregation of wildlife; over 30,000 animals and five species inhabit this area.

Watersports on this island should be met with extreme caution. The strong, persistent winds make these sports difficult even to the most advanced. Proceed with caution and remember there are no lifeguards on duty.

San Miguel is only open when National Park personnel are on the island. Remember, you have to have a permit to even be on the island. Hiking is possible as long as a ranger is with you beyond the ranger station. Hiking will provide many views you could never see elsewhere, however, make sure you stay on the trails. San Miguel Island was a former bombing range, and there may still be unexploded bombs on the island. 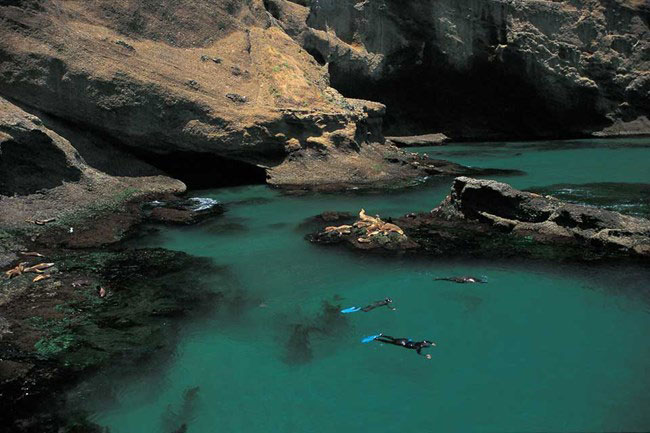 Santa Barbara Island offers over 5 miles of trails. Before you begin hiking though, you’ll have to scale 200 feet of rugged cliffs at Landing Cove to reach the top of the island. Like the other Islands, hiking is only allowed on the trails. Protecting natural vegetation and nesting seabirds is the top priority.

Camping on Santa Barbara Island is permitted and offers ten campsites at $15 per night. There are no services on the Island.

Upon arriving at Landing Cove, make sure to keep your eyes open for seals and sea lions. There’s also the Sea Lion Rookery, and Elephant Seal Cove overlooks which provides an excellent seal and sea lion viewing. 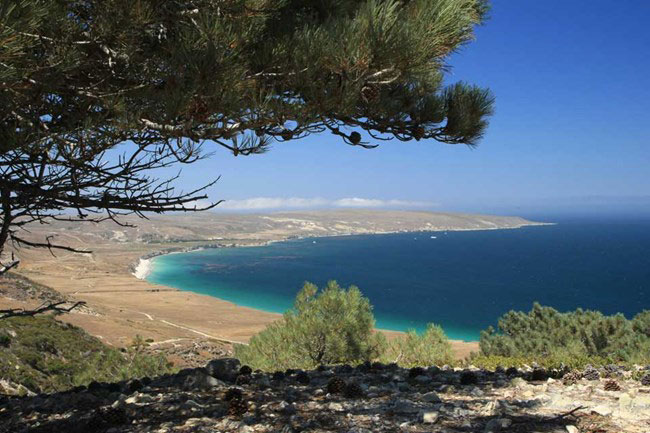 Getting to Santa Rosa Island is difficult, and the weather can be intense. It’ll take you a good 3-hour boat ride to reach the pier at Bechers Bay. You may also opt to take a 45-minute plane ride to the island instead. Flights can be made all year, whereas you can only reach the island by boat from spring to fall. Proper planning before arriving on the island is imperative.

Hiking on Santa Rosa Island offers both a flat route to Water Canyon Beach and a rugged mountainous route to Black Mountain. Like the other islands, remember to stay on the path to preserve wildlife.

Camping on Santa Rosa Island is permitted. There are 15 campsites on the island for $15 per night. Reservations are required. Toilets and potable water are provided on the island.

Santa Rosa Island is extremely windy. Regardless of the wind, beach walking on the white sandy beaches is a must. Water Canyon Beach is considered the best beach on Santa Rosa Island and is just a quarter mile from the campgrounds. Watersports on this island should be met with extreme caution. The strong, persistent winds make these sports difficult even to the most advanced. Proceed with caution and remember there are no lifeguards on duty.

Santa Rosa Island has several tidepools to be viewed. On Bechers Bay, just east of the pier is an excellent tidepooling spot. Southeast Anchorage and East Point offer tidepooling. Other tidepooling areas are available but require backcountry camping.